Unfortunately, odds are that you will know someone diagnosed with cancer. If radiation is a treatment option, please let him or her know about proton therapy. Since this is one of the few advances to potentially reduce the damage wrought by conventional cancer treatment, I want to tell anyone who will take or make the time to listen.

According to the American Brain Tumor Association, “Proton therapy uses accelerated subatomic particles called protons (energized particles that have a positive charge) to send a high level of energy directly to the tumor site through a magnetically-guided beam. In proton therapy, energy of the protons – along with the depth of penetration – can be conformed to match the unique size and shape of each tumor. This helps to minimize the destruction of surrounding healthy tissue and organs and theoretically decreases acute and long- term side effects, such as neurocognitive deficits (e.g., short-term memory problems) and hypopituitarism (i.e., hormonal imbalances). This benefit is particularly important for young children who are still developing. Less damage to healthy tissue means potentially reducing the development and intelligence changes that can occur with conventional radiation. Additionally, studies show that proton therapy can also result in fewer late effects, including secondary tumors from treatment, a major concern among physicians and families when a child – especially a very young child – is undergoing radiation treatment.”

While proton therapy has been used to treat brain tumors for nearly 60 years, it has only recently been approved for use in the United States. We are fortunate to have had access to one of the few facilities administering this technology, the Chicago Proton Center. http://www.chicagoprotoncenter.com/

Long-term effects of cancer treatment are one of the prices paid for a continued chance at life. As a family, we weighed the risks, and we took them. We do not know what the future holds- no one- not even the healthiest of individuals- can ever be sure of how many tomorrow’s they will see.

A year ago, I documented a day at the Proton Center on Facebook:

“Mondays are always jam-packed for Abram: oncology doc, port access, chemo 1, chemo 2, neuro-oncology doc, and then proton treatment. His port is already accessed so the hard part is over. It will be a long day, and counts are down so I will be giving him a shot later. But, the smiles remain :)”

At times over the past year, we have felt overwhelmed with the numerous decisions included with Abraham’s treatment. Many can offer advice, but ultimately, everyone must gather as much information as possible (in a timely fashion) and choose what is best for him or her.

We made promises to return to the Proton Center and CDH after treatment was complete. With school starting next week, today was our chance to go visit. My sister picked us up, drove us up, and we made the rounds!

Here’s our first and favorite friend who showed us the chemotherapy ropes: Nurse Jenny! 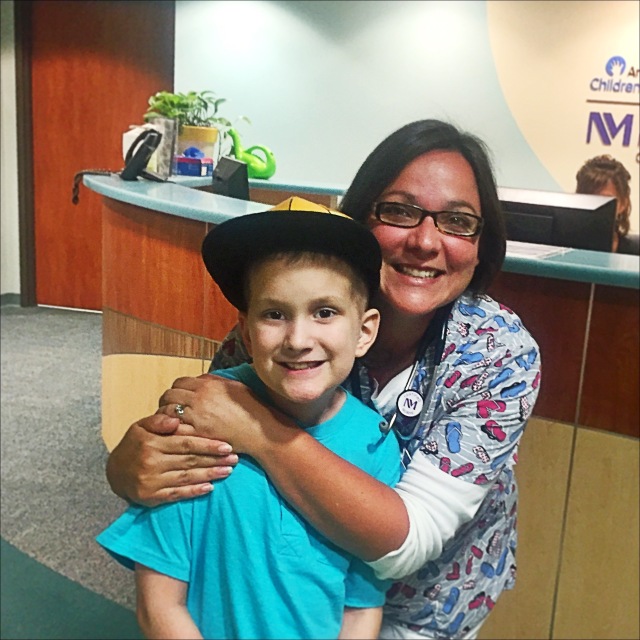 Next we stopped at our home away from home, The Ronald McDonald House.

Our final stop was at the only restaurant Abraham enjoyed during our eight-week stay, Gnarly Knots. 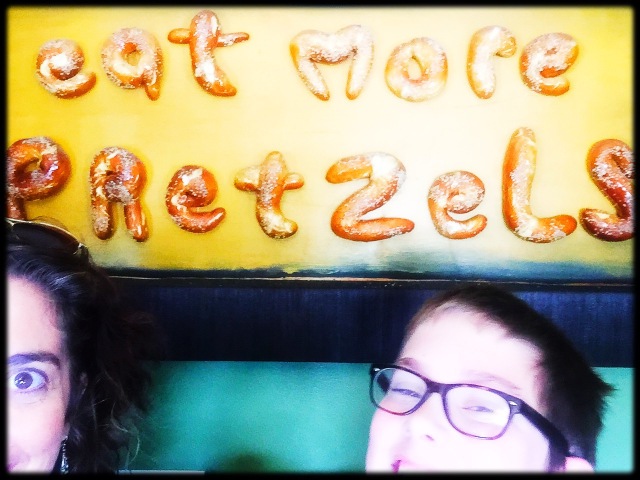 If someone would have told me that I would return to where some of our hardest days were spent, I would doubt it being high on my end-of-summer “to do list.” But a large part of the tenacity demanded by this horrific disease took root in these hospitals and cancer centers. It was under the care and guidance of sweet souls like Nurse Jenny where our strength and hope grew. They taught us that if we watched and learned and showed up for the fight, we were tough enough to make it through every round. And we did.